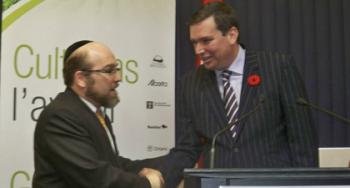 MONTREAL — An unprecedented collaboration between the federal government and kashrut certification agencies in Canada will see more than three-quarters of a million dollars of public money going toward enhancing the safety of kosher foods produced here.

Industry Minister Christian Paradis, who is responsible for Agriculture and Agri-Food Canada, held a press conference Nov. 4 at the offices of the Jewish Community Council of Montreal, also known as the Vaad Ha’ir, to announce a grant of up to $763,650 to the Vaad, which is co-ordinating this effort across the country.

The Canadian Kosher Food Safety Initiative is aimed at ensuring the highest level of food safety at all phases, from the raw materials to processing, distribution and retailing.

However, participation by industry and kashrut organizations is voluntary.

The initiative seeks to create a Canadian kosher council on food safety, in which the different kosher brands are invited to participate.

“This is in an effort to standardize food safety processes for the kosher industry,” Vaad executive director Rabbi Saul Emanuel said. Universities are being asked to assist in the development of these standards.

“In this way, no single brand has a monopoly on the certification.”

“Food safety is a priority for this government and for all Canadians,” said Paradis. “This investment will further increase consumer confidence in the safety of kosher food and help build a more competitive sector.”

The strengthened standards will be based on HACCP (hazard analysis of critical control points), which is considered one of the most stringent set of principles for minimizing risk in food production.

Already signed on to this initiative are British Columbia Kosher, Badatz Toronto and the Ottawa Vaad HaKashrut.

Paradis emphasized that this funding will benefit not only the Jewish community, but Canada’s agriculture and food industries.

Rabbi Emanuel said demand for kosher food is growing, not only in the Jewish community, but among the general population.

“At a time when Canadians are increasingly concerned about food safety, this project strives to establish the kosher brand as a mark of quality and food safety,” he said.

“Through this project, we, along with our partners across Canada, will be working with manufacturers and food retailers to build on this solid foundation to the benefit of Canadians wherever they live and whatever their religious beliefs.”

Vegetarians, the lactose-intolerant and those with allergies are among those who are also turning to kosher food, he added.

Greater safety assurance can only benefit exporters of kosher food, he said. “The worldwide market for kosher foods grew by 64 per cent to $12.5 billion in annual sales from 2003 to 2008.”

Rabbi Emanuel said the initiative, which will complement the work of the Canadian Food Inspection Agency, is concerned with all types of foods, including meat, dairy, baked goods, beverages and produce.

The first phase of the initiative involved the Vaad working with the kosher food industry to identify and assess what processes are currently in place that are unique to the kosher food sector. The second phase now involves establishing kosher food safety standards.

A database of food ingredients is to be created to assist in the audit of food processing.

Asked if a long-term goal is the creation of a Canada-wide hechsher, Rabbi Emanuel replied that “a national hechsher has been discussed. It certainly would be of great benefit,” but no concrete plans are in place at this point.

The Vaad is working with Food with a Conscience and Medina Quality Food Assurance Services, private companies that serve as consultants to industry on food safety.

Rabbi Emanuel observed that the Vaad is well-positioned to taken on this expanded, national role. Founded in 1922, the Vaad today has “the experience, capacity and technology to successfully implement this project.”

The MK has a new slogan: “Your key to a kosher Canada.”

We're not around right now. But you can send us an email and we'll get back to you, asap.